BoomerLitMag grew out of a conversation between two long-time friends, Leonard Lang and Stephen Peters. We’d both been writing for many years amid other busy careers. We’d both been published in national literary journals and won awards.

Thanks to the internet and the technologies for independent publishing, we decided to send our work out into the world independently, just as musicians have been producing their own albums for a long time. We began with house party readings, combining poetry with story and music. As things developed, though, BoomerLitMag emerged from those readings less as a way to get our work out than to create opportunities for others to share their ideas and works.

What about the name? Because our writing reflects not just our time of life but the historical and cultural time in which we came of age, our most natural audience is other Boomers. We are happily open to all writers and readers, and have featured authors from age 17 to age 97 on a myriad of topics, but have a home base in the Boomer generation.  While Stephen has retired from work on BoomerLitMag, the magazine is continuing to grow and welcome new readers and writers, new themes and styles.

Back, yeh, way back in fourth grade—I wrote my first poem or at least the first one that I remember. It was about Rome. I must’ve read it aloud because I still recall the start: “I’ll write a poem about Rome/It’s the capital of Italy you see/If you look on a map you’ll surely agree.” Catchy, eh? Maybe that opus was a better indicator I was a future marketer or publicist than a poet, but what’s interesting looking back is that I wrote a poem while other kids did maps and 50-word reports. Everyone’s work went on the wall with colored sheets of paper as backdrops. Cool.

In sixth grade I tried the same idea again, this time with a story instead of a report. The teacher made it clear, though, that my story on Alaska was well and fine, but if I wanted a passing grade I’d also have to do the factual and historical report like everyone else. I learned then that creative writing wasn’t the easy way out of actual study and work. Sigh.

Fast forward to college, where I resurrected my writing and by junior year was able to get into the creative writing class. The next semester I devised a one-on-one tutorial about poetry with the same prof, who happened to be buddies with future poet laureate W.S. Merwin. I was invited to lunch with Merwin along with the prof and a classmate who had begged me to join the tutorial. Merwin seemed surprised when we told him how his poetry worlds did amazing things with our brains. Though it was the hippie era, it wasn’t because of drugs. Even today, I’m just as amazed at his writing.

After that, my writing was quite sporadic until the late 80s. I had another renewal and won a Loft Mentor award, working with poets like John Haines, and then was published in a variety of regional, national, and international lit mags, including Centennial Review, Visions-International, The Journal, and Cimarron Review. One of my published poems was also chosen for a best of year anthology.

In the 90s, I became a regular on-air book reviewer for Minnesota Public Radio, managing to sneak in a couple of poetry book reviews a year when the hosts and directors weren’t noticing. Actually, they always noticed, rolled their eyes, but figured the segment would survive the occasional bit of poetry here in the land of Robert Bly.

Today, I continue to write and have become even more inspired now as editor of BoomerLitMag. Welcome. 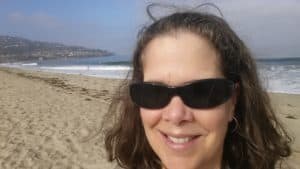 There’s never a day, or perhaps a waking hour in my life without reading or writing. It’s like respiration: it happens all the time without me noticing. Studying literature as an undergrad at UC San Diego was a constant revelation. After teaching public school for close to a decade, and feeling my education was incomplete, I picked up M.A.s in American lit and Latin American Studies. I’ve taught (and still teach) English in community college and high school and work as an academic counselor in North Carolina, where my family relocated in 2001. I’ve raised two boys with my sanity mostly intact.

Besotted by memoir and first-person essays, I tread in that territory often in my own writing, publishing in places like Scary Mommy, Full Grown People, and yes, BoomerLitMag. Fiction, though, tells our stories too; poetry is entrancing for the way it distills experience and expresses what was previously inexpressible. I love it all. I find deep satisfaction when a piece of new writing of any genre shows me something I’ve not seen before, or tells me something I’ve never heard. Excitement comes in new submissions. The biggest thrills of life are often found on the page.

As of the winter 2019 issue, Stephen has retired from the magazine. He’s continuing to write and publish his wonderful stories with their memorable and sharply drawn characters .

Send your best, previously unpublished work--stories and essays of up to 20 pages or 3 to 7 pages of poems.

Double space prose, single space poetry and include your entire submission in a single Word attachment document, no more than one poem per page.

Send all submissions to Submissions@BoomerLitMag.com with either Prose or Poetry in the subject line.

There is no payment, including for ourselves, just the glory.

search for fiction and poetry

SIGN UP to know when new stories , poems, articles are posted

© 2021 BoomerLitMag. All copyrights in this magazine revert to the exclusive property of the individual authors upon publication.
Scroll To Top